Before I start writing any of these Stereotype Blogs, I usually do a thorough research. While doing just that, I came across this Q&A in Yahoo about Indian Stereotypes.

Indians move from india to the U.S. under a visa scam called H1B in a massive scale.
Most indians fake their diplomas and education history in attempts to find a job.
Not hardworking and honest, likely taking short cut. They talk a lot and walk little.

India is just gross. A gross country with silly, stupid people; In many ways India is worse than even Africa seeing as how India doesn’t have any worthwhile mineral assets. Out of my interactions with 1.5K Indians I’ve been able to stand maybe 2.

The above replies and opinions are pretty harsh, and while I disagree with the way the above quoted people expressed their opinion, I still have to admit that they still constitute some of the Indian Stereotypes and therefore, I will be discussing each of it as we go through this article.

Whether you hate the accent or love it, you probably agree that the Indian accent is pretty funny. Having an accent is nothing to be ashamed off, everyone does. What blows my mind away though, while observing people from different parts of the world, is that everyone seems to be speaking English the same way they speak their native language and this is exactly what Indian people do. Here is Russel Peters with a bit of Indian accent.

I live in Dubai, a multicultural city with a high percentage of its population being Indian expatriates. It certainly isn’t true to say that all Indian people have bad driving skills, but it is safe (from personal experience) to say that most of the Indian drivers have driving skills and driving ethics  (awareness of other drivers’ safety).

I am going to give you some advice, “Beware the Indian driver with a Mustache”.

How to identify this type of driver?

Check 3: is driving a Japanese or American made car, Toyota Yaris, Toyota Corolla and Nissan Tida are the most common.

Maybe living and driving in India, a crowded country with narrow roads and extremely high traffic density, the Indian expatriates develop bad driving habits in their home country and tend to adopt the same driving mentality once they immigrate out of India.

The Bollywood singing and dancing

Bollywood… have you ever watched a Bollywood movie? If you have, keep reading, If not, you need to watch one, it is hilarious :D. In short, Indian movies have nice songs, nice dance moves and beautiful actresses, yet, there is a few more things to know about Bollywood.

It is unfair to generalize the working ethics of a whole nation. But a rule of thumb I like to follow in this topic is the following:

Do you want to know how productive an average German individual is? Check how productive the whole German Nation is and you can conclude that German people have high working ethics and that the German Industrial superiority is only the cumulative product of this high quality standards which most Germans have. How productive and developed is India? Not much, India is a third world country drowning in poverty and corruption.

Here is what I experienced while working with Indian Individuals. Indians work hard only if they are afraid of their manager or team lead or superior (Possibly not only Indians?). As the anonymous guy on yahoo answered, Indians are not hardworking and are likely to take shortcuts. Another reassuring factor to my opinion, is the countless low quality websites I encounter on daily basis of which many originate from India.

Indians are nice and helpful

Yes, I have had countless situations where I needed some help, possibly some directions or professional advice and I got that help from an Indian Lady or an Indian Gentleman.

Indians are Cheap and Stingy

Well, it is true. Being cheap or overspending are both not good traits, but being cheap is certainly funny in some situations :).

I always hear people complaining about the smell of the Indian food, however, I would like to disagree with everyone. Indian food is so delicious.

The Indian head wobble is cute.

You have probably heard or seen this one. Watch Jenna Marbles practice the whole thing.

India is a male dominated nation and it is even uglier than what you might have known.

You probably have heard about the recurring sickening gang rape incidents in India. It doesn’t surprise me; When I am walking with my GF or my sister or any female friend (In Dubai, which has high Indian Population), there is always a bunch of creepy Indians staring at the girl with me like hungry sexual predators. This is honestly one of the worst traits I have noticed in the majority of Indian men I have encountered.

Indian women are so beautiful.

Indian Women are so beautiful and the Indian beauty is quite distinct. Beautiful big expressive eyes, curvy waist and chest and overall gorgeous beauty.

This is certainly true. My Indian colleagues once told me that in one state in India (forgot which one), issuing a new passport, with a new fake name is pretty easy, this is the scale of corruption we are talking about. Read more about corruption in India no Wikipedia.

I haven’t been to India, but from what I read, this seems to be the truth. Sounds like fun. I do respect that in some of the Indian states, eating cows is against the law/ religion. Perhaps they are more evolved than the rest of the world, more civilized, less violent and brutal.

The “Real India” is Dirt and Chaos

India’s nature is beautiful but the massive Indian population turned it into a dumpster.

A picture is worth thousand words… here we go:

Passengers on the roof of the bus.
Photo from Flickr
User: Bjørn Christian Tørrissen
Original:http://flic.kr/p/8suk5z 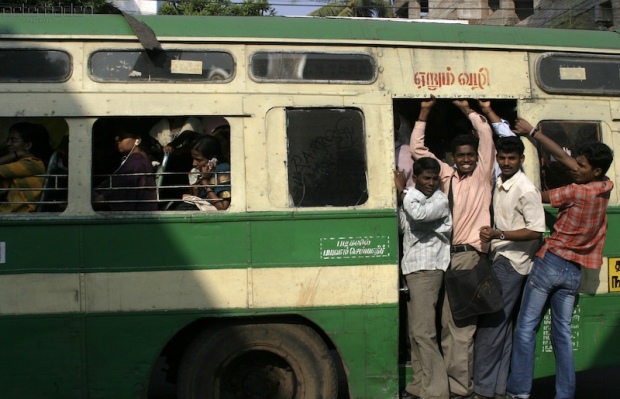 I cannot imagine ever living in India. Sounds like hell on earth. Which brings me to my next topic which is… read on please.

I will not be judging the Hygiene of 1.25 billion Indian people. Yet, I noticed this, Indian people seldom wash their hand after using a washroom… which brings up a funny story a friend told me. He was in the airport’s washroom. You know these Urinals which are attached to the wall? Well after urinating, the urinal automatically flushes, so the Indian Guy washed his hands in the urinal itself.

Whenever I am in some Grocery shop or Money Exchange or anywhere where there is Queue, Indians come and stand behind me with hardly few inches separating us. This is not OK, this is my personal private space. Two feet is close enough.

Doesn’t surprise me to see that the respect for personal space doesn’t exist in the Indian dictionary. Why? Just look at the pictures of the Indian metro train or buses.

Seriously, is this normal?

I have seen many of those, Russel Peters makes fun of this Indian habit.

Indians with power are arrogant and bossy.

You will know what I’m talking about if you have met one of them. It is very common to see Indian people possessing a UK or a Canadian passport treating other people with an arrogant/ snobbish attitude.

All Indians want to immigrate out of India

Of course this is the case, how could it not be? With the Indian population almost at 1.3 Billion, the fast growing Indian economy can’t cope with the high population growth rate, the life standards in India are so low to an extent that living anywhere on earth is probably an upgrade on the life style an Indian can maintain in India. Perhaps a one child policy in India should be applied as soon as possible otherwise the Indians will consume the resources of the whole planet.

If you are Indian and this blog post offends you, I apologize for that; I do understand that these stereotypes do not apply to every Indian.

Thanks for reading everyone, please leave a comment and let me know what you think.

87 thoughts on “The Indian Stereotypes”